The first step of this Port Moody Kitchen Remodel was to remove two structural partition walls between the kitchen and lounge room and between the kitchen and the adjacent hallway. The lounge room was uncomfortably small, and because of these two walls, it was completely separated from the rest of the house. It was a relatively useless space but with great potential.

Because the wall separating the kitchen & lounge room was structural, a Parallam beam was erected to support the floor above. This allowed us to remove the clumsy partition between the kitchen and lounge. Since the main drain stack was just adjacent to the kitchen, all the drain lines above the kitchen had to be concealed. This was skillfully accomplished by lowering the ceiling on the kitchen side of the beam to allow for these utilities. This seven inch drop also allowed us to install a series of high efficiency recessed LED light fixtures (pot lights) directly over the work surface on both sides of the kitchen.

Directly under the beam, a 10′ long island was installed, which opened up the space visually, and transformed the uncomfortably small lounge room into a natural extension of the kitchen area. We installed a breakfast bar overhang on the lounge room side of the island as well. This allows the homeowners to entertain on both sides of the island, with plenty of seating at the bar and in the lounge seating area. The Â island was also equipped with storage cabinets under the breakfast bar overhang, to replace cabinet space that was lost when the partition wall was removed. A striking slab of Super White Quartzite countertop wasÂ installed to compliment the monochromatic design scheme in the kitchen. The grey highlights in the quartzite also compliment the grey stainless steel finish of the appliances. The kitchen sink remained in the island where the sink plumbing was originally positioned and a LG dishwasher was installed adjacent to it. The cabinets installed on the kitchen side of the island included an array of pot and cutlery drawers to maximize storage efficiency.

The appliances stayed in their original position on the fridge wall and the cabinets were upgraded to drawer cabinets similar to the island. A beautiful Fischer & Paykel fridge was installed and a premium GE range, with an overhead microwave. An attractive white arabesque mosaic tile was installed on the backsplash, with dimmable LED under cabinet lighting mounted above to highlight them.

The existing laundry room was originally accessible only through the lounge room. This nonsensical doorway was covered and the room was opened to the hallway between kitchen & garage. A small beam was installed above this doorway because it was an extension of the same structural wall that was removed in the kitchen. The kitchen beam merges with it beautifully, creating continuity between the two spaces. The laundry was made more efficient by stacking the machines and creating a pantry and laundry storage cabinet just inside the doorway. The same high efficiency recessed LED pot lights were installed in the ceiling above to make the laundry super bright. A heated 12″x24″porcelain tile floor was installed in the laundry area as well. This flooring also extends into the hallway between the garage and kitchen. 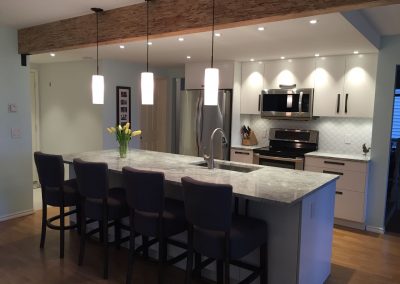 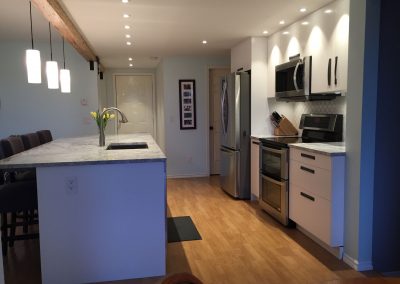 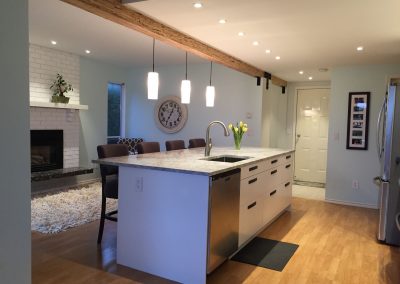 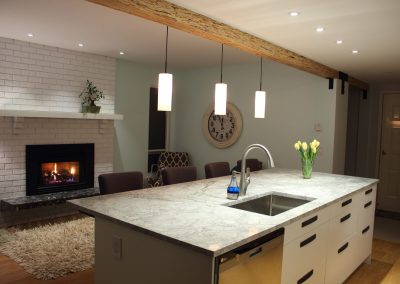 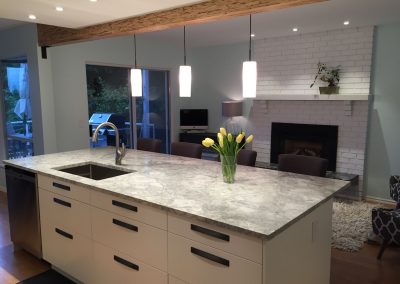 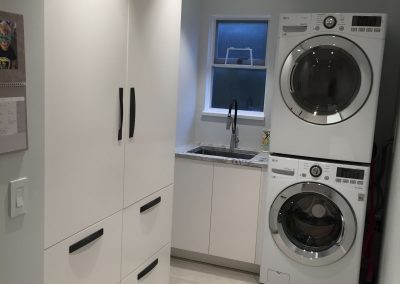 See more of our Kitchen Projects

Contact SKG Renovations today for a free estimate, and get your Kitchen upgrade underway!

Back to Home page

E-mail us for a free assessment and labour quote. Make your renovation experience awesome.